As well as presenting the Principal Award to the winner in the Regeneration Scheme £500K Category as Sponsors at this year’s BALI Awards, we’ll be celebrating our own successes too! For demonstrating “exemplary standards of professional excellence”, MCM have achieved this Award after their very first nomination. Out of 145 entries submitted in 2019, 91 National Landscape Awards have been bestowed on 63 members of the British Association of Landscape Industries (BALI).

“They are a safe pair of hands, with the service, product range, technical knowledge and value for money that we look for in a supplier.”

The Principal Award Winner in this and all other Categories will be announced at the BALI Awards on Friday 6 December.  MCM will be attending as Sponsors and potential Principal Winners.  The team will be celebrating alongside their clients and associates and toasting all their achievements in the highest echelons of the landscape industry.

Speaking after the winners were announced on Monday 9 September 2019, Managing Director Shazna Ali spoke of her “immense pride” in the team she has helped build and their “unending support and professionalism” in one of the most competitive arenas for the supply of topsoil, aggregates and waste services for landscape and construction projects. 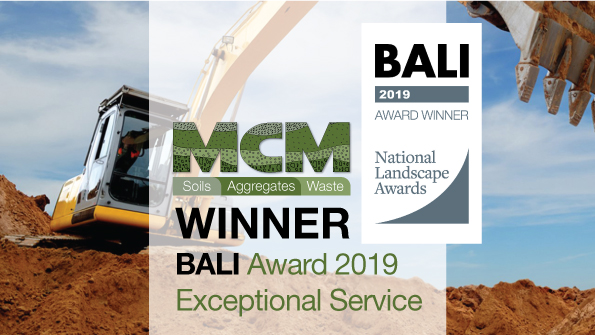 We’ll be celebrating at the BALI Awards 2019 on 6 December 2019 at Grosvenor House, Park Lane